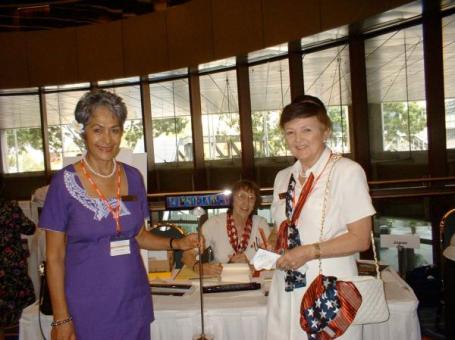 The delayed Conference, originally scheduled for August 2003, finally took place in Singapore without any problems. It was attended by 17 PPSEAWA National Chapters, including the USA with 19 participants, led by our National President Helen Chong. Unfortunately PPSEAWA International President HRH Princess Nanasipau’u Tuku’aho did not attend because of a family emergency. Vice President Valerie Hogan from New Zealand took over the running of the conference together with 2nd Vice President Mary Cabrera from Australia.

Sri Lanka was admitted as the 23rd PPSEAWA National Chapter. This inclusion occurred larger due to the hard work of Shirani Stanislaus, who is now the president of the Los Angeles chapter.

At the opening ceremonies of the Conference, Thanpuying Sumalee Chartikavanij of Thailand, former International President, received a special award in appreciation for her dedication to PPSEAWA. On UN Day during the conference, Shirley Munyan, PPSEAWA representative to UNESCO in Paris, was honored for her work and contributions to this organization.