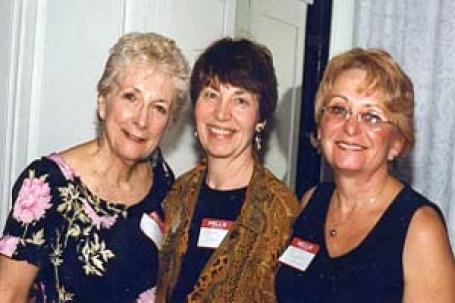 The Toledo chapter celebrated our 45-year anniversary in 2002. Our October’s meeting was held in the home of Joe Ann Cousino. Joe Ann, a talented artist, gave us a wonderful presentation called Artifacts in Asia. She exhibited gorgeous pieces of handmade artifacts which were collected in the past century. Nearly 30 of our members attended.

Dr. Munir Ahmad, the founder of Dosti Foundation, gave us an inspiring speech: Helping Schools in Pakistan. We learned how much effort Dr. Ahmad and his partners have spent in assisting thousands of children to get basic elementary education. He said that about 80% of the girls were not allowed to go to school previously because there were no schools in the rural areas. Many more schools are needed in Pakistan to provide basic education to everyone.

His stories of Pakistan touched us all - we seemed to see small faces with eyes eager to learn, desiring to know something more about this world. Elizabeth Balint volunteered to organize the PPSEAWA Toledo School project. With the help of Lousie Bankey, Isabelle Christopher, Ginney Schlicher, and many more, $425 in individual contributions were gathered in only one month. The check was formally handed over to Dr. Ahmad and immediately forwarded to the Dosti Foundation representative in Pakistan. Within another month, PPSEAWA Dosti School No. 10 had its opening celebration with 22 newly admitted students, including 14 boys and 8 girls, ranging in age from 6 to 12!! We can now watch the children we are sponsoring grow up to live a much richer life.