A Message from the USA President 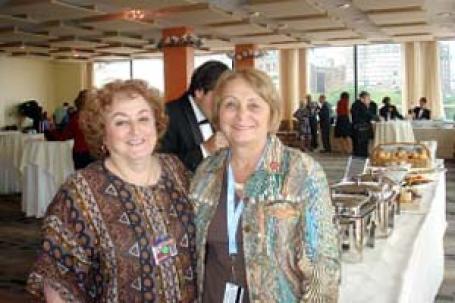 May you share the gifts of peace and contentment with all those you meet and especially through the fellowship of PPSEAWA in 2007.

We look forward to the 23rd International Conference of the Pan Pacific and South East Asia Women’s Association, 21-27 March 2007, “Women Making a Difference Through Peace.” The conference will be hosted by PPSEAWA NZ Inc. at the TelstraClear Pacific Events Centre, Manukau City, Auckland South. They are celebrating the 75th anniversary of the foundation of PPSEAWA NZ in Wellington, NZ. It won’t be long and our delegation will leave for Auckland, New Zealand in anticipation of sharing our thoughts and ideas with our members from twenty-three countries. Many thanks to Teresa Hintzke, USA Conference Chair and Rosanne Levy, Co-Chair, for doing an excellent job.

Several “peace poems” that were created by eight grade students from Lake Middle School, Millbury, Ohio and were sent to Mary Cabrera, Ambassador for Peace, PPSEAWA International Council, NSW Australia. We hope that some of them will be included in a PPSEAWA book as a project by Katya Shmelkova, an undergraduate student at the University of New South Wales.

Our condolences to New York Chapter for the loss of immediate Past President Casey Bush who passed away on December 12, 2006. They had a memorial for Casey on Saturday, January 27th at the United Nations Church to celebrate her life. Of course, we will always remember her for her lovely hats and her generous hospitality. Casey will be sadly missed. Several members gave contributions to the Education Fund as a tribute to her memory.

Because of the wonderful support of our members to the PPSEAWA-USA Education Fund, we were able to provide adequate financial funding for Alisha Sachchathep, a Thai sophomore at Mahidol University International College, to attend the United Nations Commission on the Status of Women meetings, (CSW-51), held in NYC at the UN, 23 February through 3 March 2007. We are also grateful for the efforts of UNICEF Rep, Janet Nixon, and the cooperation of Thai Women Watch.

Ardenia Jones Terry, (a new Toledo Chapter member), and I had the privilege to attend the 59th Annual DPI/NGO Conference, UN Headquarters, NYC last fall. One speaker that really impressed me was a 1994 Rwanda genocide survivor, Eugenie Mukeshimana. She spoke of gender-based violence against women in conflict regions and empowerment in the post-conflict period.

Many thanks to Chicago Chapter and their President Anita Yamada for hosting the Fall Board Meeting ‘06 held at the Hilton Garden Inn in Evanston, Illinois. Teresa Hintzke and Diane Posner hosted a fabulous dinner for Board Members at Teresa’s home the night before. Some members enjoyed a theater performance of “Inherit the Wind” at the Northlight Theater that weekend.