A Special Art Show in Honolulu. and Remember Leilani? 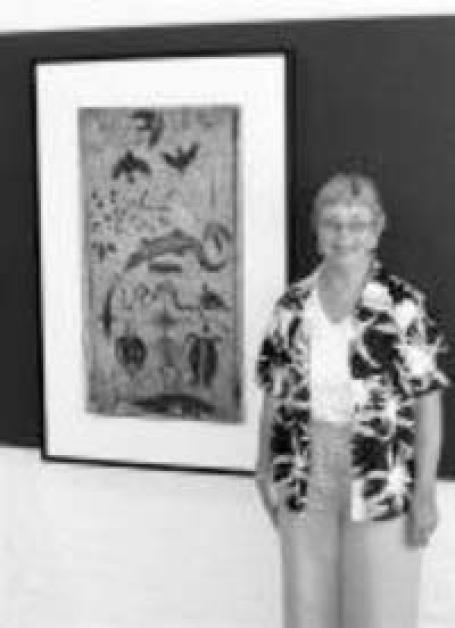 I’m sure many who went to the Cook Islands PPSEAWA International Conference in 2000 will remember Leilani Bin-Juda who was one of the two Australian youth delegates who distinguished themselves at the conference.

Leilani left the Cook Islands after the youth workshop to travel to North America and New Zealand to research the role of museums in the generational transfer of indigenous culture and opportunities for employment for indigenous youth. A Churchill Fellowship awarded in 2000 facilitated her travel. Afterwards she set up a regional museum on Thursday Island and worked there for some years. I met up with her again in Canberra in 2008 where she is currently an officer in the Department of Foreign Affairs and Trade with the responsibility of organising exhibitions and special events showcasing Aboriginal and Torres Strait Islander culture overseas.

Leilani had arranged for a wonderful travelling exhibition of Torres Strait Islander art that was shown in Honolulu in May 2008 and during discussions informed the consulate of the special PPSEAWA 80th anniversary meeting that Mary and I were attending around the same time.

As a result Mrs Kath Grant, the wife of the Australian Consul contacted me on the eve of our departure with a view to arranging some hospitality for the Australian delegation. With the busy schedule of meetings and celebrations over the five days it ended up with our meeting on the final day of our visit for morning tea at the consulate. This was followed by a special viewing of the Torres Strait Islander art exhibition Gelam Nguzu Kazi– Dugong My Son, which was in the process of being set up for opening in the nearby Pegge Hopper Gallery later in the week. It was a special treat to see these exceptional linocuts which were on display in Honolulu for two weeks before moving on to New York for the next exhibition and my friend Ann and I very much appreciated the generous time given us by Candice who transported us back to our hotel afterwards.

Life’s rich tapestry is woven with many threads and patterns and it was amazing for me to see how Leilani’s and my path crossed with PPSEAWA again in Honolulu. PPSEAWA Australia is very proud of the success its youth delegate in 2000 has made of her career. She is a wonderful role model for indigenous youth in Australia.

We in PPSEAWA wish her good fortune and I am sure we will hear more of Leilani in the future when our paths cross again in some unexpected way.