Report of the Midterm Council Meeting 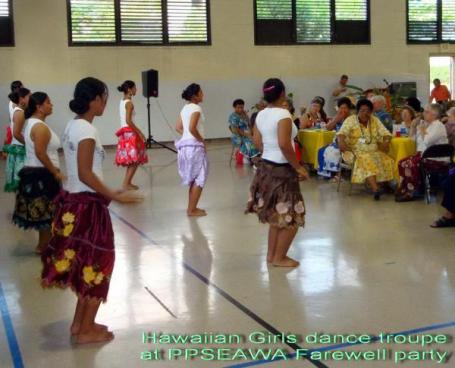 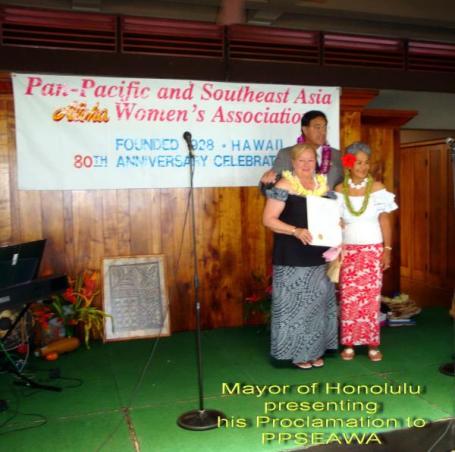 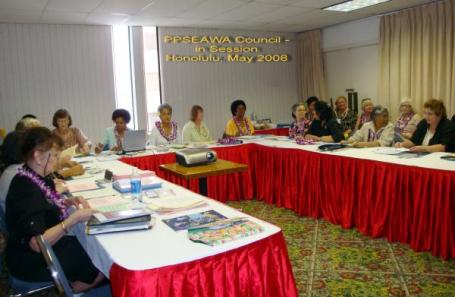 This report is long overdue. In March of 2007, in Auckland, New Zealand, at its first Board Meeting, the newly elected PPSEAWA International Council agreed to accept PPSEAWA Hawaii’s invitation to hold the MIDTERM COUNCIL MEETING, in Honolulu, leaving open the date.

The invitations for May of 2008, went out early October 2007. The International Executive Council worked hard to prepare the Agenda, related documents and to set the format for the Council Sessions.

The International Council had sent invitations to all PPSEAWA Country presidents which was the first time in the Council’s history. Also, PPSEAWA Hawaii extended its invitation to its 80th Anniversary Celebration to everyone who could make the trip.

We were glad to receive many additional guests from abroad.

Most of the attendees arrived a few days earlier, checking into their accommodations between May 12 and 15. In the lobby of the Queen Kapiolani Hotel, our hospitality committee had set up a table where they welcomed, registered and assisted all arrivals. This also served as a suitable gathering place for all participants, to meet, exchange stories and make sure everyone was accounted for.

The First Day - May 16, 2008, we met at the Queen Kapiolani Hotel for a casual Welcome Lunch where guests were greeted with leis and Aloha by our local PPSEAWA members,. Many joyful reunions and new acquaintances took place.

This was followed by the first Session of the Council which was well attended by Country presidents and other non Council members.

In the afternoon, the President of the International Council, Dr. Viopapa Annandale officially opened the PPSEAWA International Midterm Council Meeting - presenting its objectives:

There were four sessions (spread over four days) allocated to achieve these objectives. The Minutes of the proceedings reflect the fact that they were busy, informative and highly successful. Below are some points of general interest from amongst other important results of the deliberations.

Many of our visiting sisters had come especially to share the celebration of PPSEAWA Hawaii 80th Anniversary which took place on Saturday, 17th of May at the beautiful Outrigger Canoe Club. The attendance was wonderful: almost 100 - counting our local members, guests and our sisters from “off shore”. The tables were decorated with beautiful flower arrangements, a Hawaii music CD and an Anniversary Booklet on “PPSEAWA Hawaii 1928-2008” as souvenir gifts for everyone.

After the formal opening of the celebration, impressive and precious birthday gifts from our visiting country members were accepted by the PPSEAWA Hawaii President and leis given out, in gratitude. Warm, congratulatory words were spoken and lots of picture taking followed . After the lunch and a Birthday Toast, PPSEAWA USA (the largest out of town group) lit up the Birthday Cake.

Later, we were entertained by a Hawaiian show, performed by a talented, colorful dance group and its band, and arranged for by the PPSEAWA Hawaii President. The audience was drawn into the dancing, culminating in enthusiastically participation.

Amongst others, one of the highlights was the Mayor of Honolulu, reading and presenting his Proclamation to mark May 17th as ‘PPSEAWA Day’ on the Hawaii Calendar.

For Monday, 19th of May, and to close this memorable Midterm Conference, PPSEAWA HAWAII planned an evening at the Susannah Wesley Community Center, the place of our ongoing community relations work since 1998. A tour around the Center, a sumptuous, Hawaiian style buffet, and beautiful dance performances by ethnic groups of the area of Kalihi, farewell speeches and sisterly embraces filled the evening.

The PPSEAWA Hawaii members enjoyed being hosts to their PPSEAWA sisters. In thanking them for coming to Hawaii we hope they took home a feeling of ALOHA.

Last but not least, I would like to state that many of our PPSEAWA Hawaii members contributed to the success above programs. We have felt the importance and honor of having this International Council Event taking place in Honolulu.