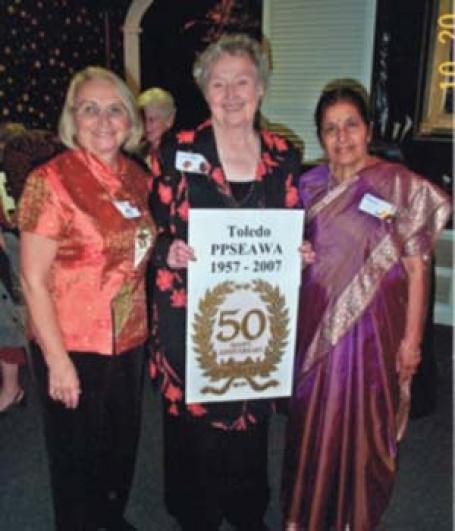 The Toledo Chapter of PPSEAWA has lost three dear friends and inspiring members. On the last day of October, 2007, Adeline Talip died at the home of her daughter Lila Aossey in Cedar Rapids, Iowa. Adeline had traveled to many of the International meetings during the 1960s, ‘70’s, ‘80’s and ‘90’s. She shared her home often for chapter meetings, led our chapter as President twice, and served in many other offices through the 5 decades of her membership. She held the longest active membership, but sadly was unable to be in Toledo for our 50th year celebration in October.

Joe Ann Cousino, our revered sculptor of international fame, died on December 21, 2007. She, too, had attended several international meetings of PPSEAWA, and prepared many interesting programs on her extensive collection of antique treasures or interesting travels.

Each of these women contributed greatly to the long time success of the Toledo Chapter, and we shall be diminished by their loss.

Plans for the 2007-08 year have been set, with the biggest event of the year to be a gala celebration for the chapter’s 50th anniversary on October 20. There will be a luncheon at Georgio’s Restaurant followed by reminiscences from our members, and music by members of the Orchestra of the Chinese community of Toledo. Of note will be special honoring our founder, Ell Phillips Stewart, an outstanding woman of local history.

Other programs will include a local photographer Hewen Slak, internationally known for her work of advancing the cause of peace through Art and theToledo Manager of the DOSTI schools of Pakistan, founded by a local Pakistani doctor, one of which our chapter founded in 2002 and continues to support.

Lorna Ganasalves will report about her work with youth of India in promoting Peace as well as her study of women’s work conditions in SE Asia; and plans are underway to join a local group, the Study Hour, to explore how we each can support the work of the other.

This summer in July an event occurred which will be shared during the fall meeting: our member Temuulen N. Sunid wed Neil Johnson in a lovely outdoor wedding in Glacier National Park. Nine of her family and friends attended the wedding and parties before and after the event. They came from her native Mongolia, some to be in the ceremony and then vacation in the national parks of Montana and Wyoming. At the reception following, Temuulen and Neil donned native Mongolian wedding robes of gorgeous silk brocade and presented certain honored relatives of the groom and bride with the ceremonial warmed milk in a presentation bowl. Since both parents of Temuulen are dead, Louise Bankey was the honored “family” for her.