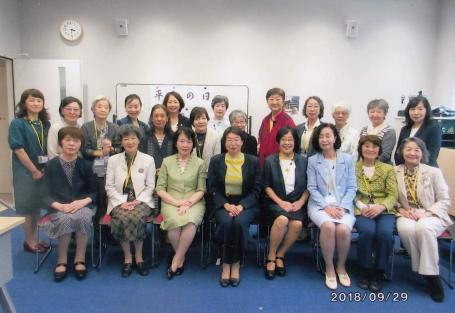 The Tokyo chapter of PPSEAWA Japan held an International Peace Day meeting at the Sendagaya Campus of the Tsuda University in Tokyo on September 29, 2018. The keynote speaker was Ms. Naoko Matano, former President of the Japan YWCA.

Ms. Sonoko Nishitateno, President of PPSEAWA Japan, talked about the origin of the Peace Bell at the United Nations in her opening greeting. Many people, including the representatives of sixty five countries and the Pope Pius XII, had responded to the appeal of late Chiyoji Nakagawa, then former Mayor of Uwajima City, Ehime Prefecture, and the Director of the Japan United Nations Association, and donated the coins. The Bell was casted with the coins as the symbol of the people’s longing for peace, beyond the boundaries of borders and the difference of religion.

The speaker, Ms. Naoko Matano, gave a speech entitled “To Pursue Peace through Private Sector Diplomacy - particularly in China and South Korea”. At the start, Ms Matano talked about her thinking on the war and peace. Twenty years ago, she visited the place in China where the incident Rokokyo took place on July 7, 1939, which led to the Japan–China War that had lasted for six years until 1945. Many people had suffered and many lives, Chinese and Japanese, lost their lives. For the Japanese, there were the Great Tokyo Air Raids, Okinawa, Hiroshima and Nagasaki. A devastating war could start almost by a mere accident and it is very difficult to halt the war. We, the Japanese have learned a great many lessons through hardship. We should never have started the war. We should make every effort not to start wars, she emphasized.

Then, Ms. Matano mentioned various experiences including her visit to the Hiroshima Peace Park where she encountered a poem entitled “Umashimenkana” (Bringing Forth New Life) composed by Sadako Kurihara, an atomic bomb survivor. She wrote about an incident in an air-raid shelter in August, 1945. In the basement of a building hit by the atomic bomb, many people were suffering and moaning with pain. They heard a strange sound because a woman went into labor. 'A baby is coming!' What should we do in the darkness without even a match for light? Suddenly, a woman who was severely injured said, ‘I was a midwife and I will help her have a baby! Thus a new life was born, yet before dawn, the bloodstained midwife was dead.

“By encountering this poem, ‘Umashimenkana’, I learned that Hiroshima is the place not only for telling us the foolishness of the war, but also the place that tells us the preciousness of life,” Ms. Matano said. Her tireless yearning for peace started with this incident.

Ms. Matano further explained, “When diplomacy between the government is a deadlock, there is a role for civil societies to play. I have so far visited Korea ten times and China six times, and have met people from all walks of life. What I have tried to do with them is to have a meal together. While we dine together, we get to know well each other and can become more friendly”, she said. “ We talk various subjects in a relaxed atmosphere. When I attended at the World YWCA Annual Conference in Thailand, I dined with the Chinese YWCA Representatives. We talked about the famous Japanese movie star Ken Takakura who is also very popular among the Chinese and we got into full swing. I have had such a good relationship with the former President of Chinese YWCA.”

“When you want to have a good relationship, as an organization with other organizations, it is important to make your stance clear. At the Annual Meeting in 2000, the Japan YWCA adopted the statement, ‘ An apology to the Asia and the Pacific countries and a desire to look to the future’ “, she said.

“Based on the relationship of mutual trust for many years, when there were the Great East Japan Earthquake in 2011 and also the Kumamoto Earthquake in 2016, both the Korean YWCA and the Chinese YWCA sent us the expressions of sympathy and generous donations promptly. By using these donations, we could extend a helping hand to the people who needed our help”, Ms. Matano emphasized.

Before and after her speech, she played her flute which touched our hearts deeply, with its beautiful and thoughtful sounds. Ms. Matano’s speech inspired us to think seriously about what we can do to promote peace however small it might be.