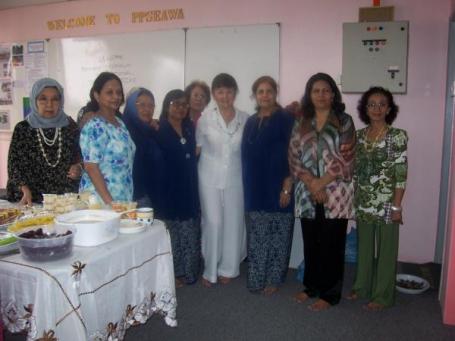 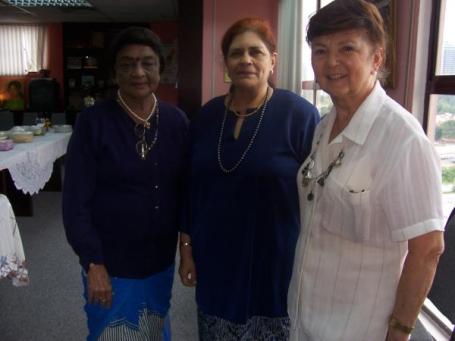 PPSEAWA Malaysia was highly honored to receive PPSEAWA International President Teresa Hintzke during her 2011 Asia Pacific Tour from April 1 – 3, 2011. She had earlier visited Bangkok, Thailand, but had to miss Japan which was badly affected by the earthquake and tsunami of March 11, 2011.

Teresa arrived on the afternoon of April 1, was met at the airport by President Dato’ Rahmah and taken for hotel check-in. After a short rest, she was the guest of honor at a welcome to Malaysia dinner hosted by President and executive committee members of PPSEAWA Malaysia at Restaurant Sri Melayu in Kuala Lumpur.

In an informal atmosphere, Teresa had the opportunity to meet current office-bearers and chit chatted about things of mutual interest. She also met some of the members of a fund-raising sub-committee which had just held a successful brunch with the Stroke Support Group of the University of Malaya Hospital. The venue, Sri Melayu was noted for its’ wide variety of Malaysian cuisine, housed in a unique Malaysian architectural setting, and with cultural performances located in the heart of Kuala Lumpur.

The following day, April 2, at noon, Teresa accompanied by Dato’ Rahmah, was taken to PPSEAWA Malaysia’s office headquarters, at Jalan Liku, Bangsar. This was an official visit, followed by a pot-luck brunch, and an opportunity to meet more PPSEAWA members. 32 members were present. Out-going Vice President, Prof. Fatimah Hamid Don, welcomed Teresa on behalf of President Dato’ Rahmah, Executive Committee members and PPSEAWA members present, gave a brief history of the office and activities of PPSEAWA Malaysia, and invited members to introduce themselves. Included among the guests were 5 Singaporean visitors, who had come from across the causeway to learn about PPSEAWA and to meet with PPSEAWA International President.

After introduction, Teresa gave a concise historical background of PPSEAWA International, its present activities and future prospect. She invited members to focus discussion on their international roles and hoped that Malaysia could contribute actively in future programs. The discussions continued during lunch, and the meeting ended at 3pm.

As different countries have different set-ups for the Association, President Teresa welcomed Singapore’s initiatives. She was pleased to note that Malaysia has the unique status of being an independent NGO, having its own office space, financially independent, and a wide range of activities. She hoped to see more county chapters would achieve similar status.

Teresa left Kuala Lumpur the next day, April 3, to Jakarta, Indonesia for another fruitful visit. We wished her Selamat Jalan, Farewell and bon voyage!