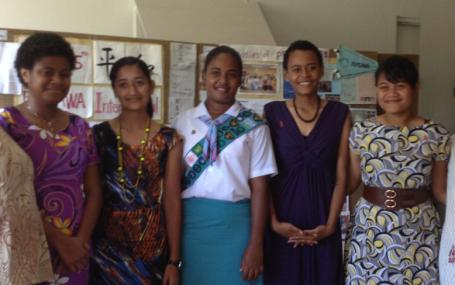 As a member of the Working Group on Girls (WGG), and its Girls Against Violence taskforce, I have participated in several side events to the Commission on the Status of Women sessions (CSW) at the UN in New York, where girls were given the opportunity to speak out publicly about their lives. The topic is always “Are We Doing Enough for Girls?”

So, I thought, “Why not bring such an event to Fiji?”

To prepare, I worked with my wonderful Fijian counterpart, Mere Tuikoro, who interviewed possible participants. Then we selected five 13-year old and 14-year old Girl Guides to speak on the topic during the last PPSEAWA International Conference in Fiji. The resulting “speak out” was a very exciting event attended by Fijian dignitaries, the press, many of the girls’ schoolmates and relatives, and the entire PPSEAWA Conference group on August 30, 2013.

Each of the five girls spoke directly from the heart about her experiences. They were all motivated by the recent attack on Malala for advocating education for girls. They knew that when the Pakistani Taliban shot her, as Ban Ki-moon said, “What they feared was a girl with a book.”

To quote one of the speakers: ”We are not doing enough for girls. As young girls we need to not just say this, but we need to walk the talk and say ‘enough is enough.’ We will no longer tolerate another girl dropping out from school just because a young boy is able to say the words, ‘I love you.’ We will no longer stand by and watch children having children because this is the time we young girls need to rise and say: ‘ENOUGH is ENOUGH.’”

Topics
Working Group on Girls
Commission on the Status of Women